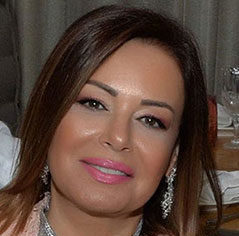 Engineer Bushra Itani Issa graduated from UNIVERSITE SAINT JOSEPH with a Bachelor of Engineering, Computer and Communication, holding also a Master Degree in Automation and Control from IMPERIAL COLLEGE OF LONDON.

Mrs. Itani is now a Deputy CEO and shareholder of “ISSA Holding”, which was founded in 2006 to manage a group of companies generating more than 250M USD in Revenue, with more than 2,000 professional employees distributed between 9 countries in the Middle East Region.

Mrs. Itani plays a key role in Managing and Leading “International Communications Systems Group, (ICC)”, since 1997, which is a subsidiary if ISSA Holding and was established in 1984. ICC-Group is now one of the top three IT players in Lebanon, with more than 200 ICT professionals and engineers, in partnership with major IT brands such as HP, Cisco, Microsoft, and many others. Mrs. Itani is now the Chairman of the Board of Directors of ICC-Group.

She had a key role in the Government sector as well by being a duly elected member of the “Beirut Municipal Council” at Beirut Municipality and President of the “Culture and Heritage Committee” from 2010 till 2016.

Mrs. Itani is now a member of “Sursock Museum” Board of Trustees and was a member of the Executive Board from 2010 till 2016. She is a founder and partner of “Beirut Celebrations” since 2012, the last represents an NGO that organizes street events, celebrations and Independence Day Marches.