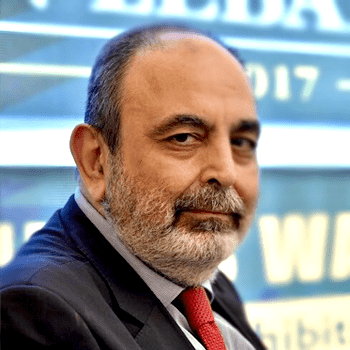 He is the founder and CEO of multiple companies related to digital media and eBusiness solutions for the past 25 years. He was involved in multiple projects related to eGovernment Infrastructure, multimedia, advanced collaboration and news-room automation. He chaired the PCA (Professional Computer Association) acting on public initiatives that aims at developing the internet infrastructure and the legal framework.
Founder and President of the Internet Society (ISOC) Lebanon Chapter since 2016, he founded in 2012 the Lebanon Knowledge Network (LebKnoC) an initiative aiming to open knowledge centers in various remote areas in order to promote local economy and bridge the digital divide.
As a digital content consultant, for the UN-ESCWA, he was part of the Digital Arabic Content Promotion Project that was executed between 2007 and 2012 where he developed case studies and business models.
He is also a Professor of Entrepreneurship, Negotiations and Knowledge Economy at USJ and recently a member of The MIT-Venture Mentoring program acting on supporting young entrepreneurs.
He was appointed as the National Expert for Lebanon and a member of the Executive Board of Directors of the World Summit Award, a UN initiative aiming at finding and promoting the best e-Content projects worldwide.
The Award has been going on since the first WSIS – World Summit on Information Society (December 2003) held in Geneva under the directives of UN Secretary General Kofi Anan.
To date more than 178 countries are actively involved in this competition. It is divided into 8 categories: Government & Citizen Engagement, Health & Well Being, Learning & Education, Environment & Green Energy, Culture & Tourism, Smart Settlements & Urbanization, Business & Commerce, Inclusion & Empowerment.